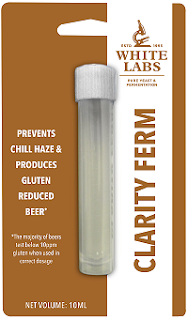 Recently, I brewed a Belgian Tripel. I was very careful during the brewing process to chill the beer as quickly as possible using my stainless steel wort chiller and cold/ice water.  The chill process did take much longer than usual (approximately an hour) but was as fast as I could make it.  When I've taken samples of the beer to measure its gravity, the samples have been unusually cloudy.  This is decreasing over time, but slowly.

I read about White Labs Clarity Ferm and decided it was worth a shot.  I should note that this enzyme is supposed to be added at the same time yeast is pitched, not at the 3.5-week fermentation and conditioning mark where I'll be using it.  Still, there is evidence to suggest that it will help clarify the beer even when used in a less-than-optimal manner.

Chris Colby of the Beer and Wine Journal site did an experiment with Clarity Ferm in 2014, using the manufacturer's directions.  He brewed multiple 5-gallon batches of the same two beers, then separated them into one-gallon batches.  One of these was left untreated.  The rest were treated with different levels of Clarity Ferm.

Once the beers completed fermentation, some of the samples were primed and carbonated, and others were tested without carbonation.  Laboratory equipment was used to measure gluten (protein) levels in the beer.  The results were interesting.


If you're gluten-sensitive and enjoy beer, Clarity Ferm may be a way to enjoy your favorite beverage without the discomfort associated with gluten.

You're probably wondering, as I was, whether Clarity Ferm interfered with the taste of the beer.  Here are the results from Colby's taste tests:
In other words, apart from a possible difference in mouthfeel, it appears to be almost impossible to distinguish a Clarity Ferm treated beer from an untreated one.