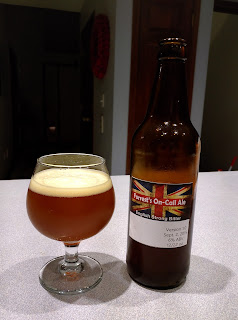 For Christmas, I received a book of historic beer recipes.  I ordered the ingredients for an English Bitter that looked interesting because it called for Saaz hops instead of one of the more traditional varieties like UK Goldings.  I decided to make it and ordered the necessary ingredients.

When brew day came around, I learned that either I had ordered the wrong amount of Pale Malt, or the shop had shipped me less than I ordered.  I had only 8 pounds instead of the 10 required.  I decided to substitute two pounds of CaraVienne malt for the missing two pounds of Pale Malt rather than abort the brewing session.  I also overlooked the invert sugar called for in the recipe, and substituted some Brun Fonce sugar I had on-hand, which is similar.

The grains were placed in The Grainfather RIMS brewing system with 4.5 gallons of water.  The grain was stirred to ensure it all got wet, then the recirculation pump started.  The mash water was heated to 152F and held there for 60 minutes.  The temperature was then raised to 156F and held there for 20 minutes.  An iodine test came up clean, indicating a good starch conversion.

The grain was sparged with two gallons of water at 170F, and one gallon at 165F.  (This was per the original English recipe I started with.)

For the first 30 minutes of the boil, nothing was added to the wort.

After 30 minutes of boiling, the German Northern Brewer hops were added in a cotton bag.

After 60 minutes, the Czech Saaz hops were added in another bag.

At 80 minutes, the Brun Fonce sugar was added, along with a Whirlfloc tablet and yeast nutrient.

At 90 minutes, the heat was turned off.  The hops bags were removed, and the wort was pumped through a counter flow wort chiller into a santitized stainless fermenter.  The wort left the counter flow chiller at 79.3F.  When it cooled to 76F, I oxygenated it with an oxygen tank and stone, then pitched the yeast.

The beer remained in the primary fermenter until bottling, when I transferred it to a sanitized bottling bucket.  Mangrove Jack's carbonation drops were used for priming the beer.  One drop per 12 ounce bottle and two per 22 ounce bottle seemed to work well.

This brewing session was actually quite a learning experience.  This was my first full brew using The Grainfather brewing system, and my second all-grain batch ever.  I learned a lot about The Grainfather in this session.  One thing I learned was that the built-in scorch protection can be tripped easily during a brewing session.  The problem with this is that the reset switch is underneath the unit, so you have to tilt the entire device (filled with hot wort) to an angle that allows you to reach underneath it to get to the switch.  My wife had to help me with that on this batch.  Apart from that issue, the brewing session went flawlessly and The Grainfather performed as designed.

I also learned from this experience that it's important to double-check your grain order at the time you order it, when you receive it, and before brewing.  In this case, I don't know if I didn't order the right amount of grain (8 pounds vs. 10) or the supplier shipped the wrong amount.  It doesn't matter at this point, since the beer is made and turned out fine, but I need to remember this for the future.  I also need to double-check my recipes, too, since I somehow missed the invert sugar when I placed the grain order and when I wrote out the first draft of my brewing instructions for the session.

I don't think the brewing process could have been much improved on.  The Grainfather performed well apart from tripping the scorch protection once.  Since then, I've built a small wooden stand for it to sit on so that I can reach the reset button when brewing.

As for the beer itself, here are my tasting notes:


If I make this beer again, I'll probably make these adjustments:


All things considered, this was an easily drinkable beer.  It doesn't have much character to it, though.  It's very basic, and even a little bland.  I've definitely made better.