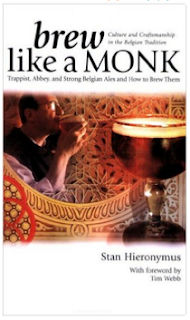 I recently finished reading Brew Like a Monk by Stan Heironymus, which is a book I strongly recommend if you want to brew a great Belgian-style beer.  The author spoke with many experts in Belgium about their brewing practices, recipes, equipment, ingredients, and history.  As a fan of Belgian beers styles, I learned a lot from the book.  I'll share some of that here.

The most important thing to learn is that Belgian brewers try things that brewers in other parts of the world would not.  They'll experiment with grains, adjuncts, yeast, fermentation chamber geometry, and more, in a quest to make a beer they enjoy.  Many breweries, in fact, create a number of beers that are popular and "pay the bills" while creating a few that are intended only to satisfy the curiosity or taste of the brewmaster.

One interesting point in the book is that the Belgian brewmasters recommend that Americans not try to create a carbon copy of an existing Belgian beer, but instead to brew a beer intended for American beer drinkers that uses elements from the Belgian brewing playbook.  It's not that they view us as competition, but more that this is what they are doing in Belgium - creating beers that match the Belgian palate and sensibility.  They recommend that Americans do the same.

As you read the book, you'll see two things.  First, that each Belgian brewery, brewmaster, and beer has some elements to its ingredients, brew process, brewing equipment, etc., that are unique to it. This means that no single set of guidelines and methods will allow you to produce a beer that is identical to your favorite Belgian ale (assuming that is your goal).  Still, as you read the book and consider the recipes and techniques within it, you'll realize that there actually are some generalizations and similarities between the various Belgian breweries and what they do.  Recognizing these could help you produce a much better Belgian-style beer.

Here are some of the patterns I noted in my reading (you might discover more):
As I noted earlier, these are generalities gleaned from reading all the stories in the book about the Belgian breweries.  If you read each case in the book by itself, you'll find that not all of the above statements are true for every brewery and beer discussed in the book.  My goal above is to give you some general suggestions that you can use in any Belgian-style brewing effort.  You'll have to discard or adjust the guidelines based on your needs and results.

The following tips from from a BYO Magazine article I read some time after this book.  The following advice comes from Grady Hull at New Belgium Brewing Company in Fort Collins, Colorado:


The following comes from Phil Linehart of Brewery Ommegang in Cooperstown, New York:
Vinnie Cilurzo of Russian River offers the following tips:
In another article from BYO by Stan Hieronymus (the author of Brew Like a Monk), the following advice is shared:
I may add more notes here as I read more.

Much of the flavor in Belgian beers comes from the yeast.  Belgian yeast can give off flavors that are mistaken for various fruits and spices, when those fruits and spices are not included in the beer at all.  Therefore, one of the biggest factors in getting the "right" flavor for a Belgian-style beer is getting the yeast to produce the right flavors.  Pitch rates, fermentation temperatures, and the geometry of your fermenter all play a role in this.

Belgian breweries often pitch lower yeast cell counts than American brewers do, which can improve the production of flavors from the yeast.  This stresses the yeast slightly, causing it to generate more flavor compounds.  Cell counts can be as low as 1 million cells per milliliter of wort, This works out to around 19 billion cells in a 5-gallon batch.  A typical vial of White Labs yeast may contain 75-150 billion cells by comparison.  Most U.S. craft brewers making Belgian styles pitch 1 million cells per milliliter of wort per degree Plato, resulting in even higher cell counts.  The Belgian brewers in the book recommend that you play around with pitching rates to find what works for your recipe, but realize that you could have trouble if you under-pitch.  (Low pitch rates can cause solventy flavors or lower ester production.)

Pizza Port, an American brewery known for its Belgian beers, overpitches cell counts and undercuts oxygen at knockout, forcing the yeast to produce esters.  Fermentation starts at 64 degrees Fahrenheit and is allowed to run without any temperature controls.  If you're worried about under-pitching, this could be an option.

The book also mentions that cylindro-conical fermenters can reduce the production of esters.  If you're not getting the flavors you want in a conical fermenter, it may be time to switch to a bucket, carboy, or other vessel with a flat bottom.

What I've shared in this post is a small subset of what you'll find in this excellent book.  It shares Belgian brewing history, connections between the many famous Belgian breweries, commentary from brewmasters, recipes, analyses of popular Belgian beers like Chimay and Westvleteren, and more.  If you're a fan of Belgian beers and home brewing, you should definitely read the book.