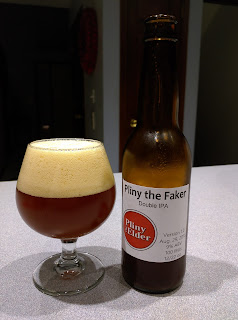 Although it may surprise many homebrewers to hear this, I've only brewed one IPA before this.  I would never have brewed that one if it hadn't been part of the Mr. Beer kit I received at the time.  Unlike most craft beer fans these days, especially here in Central Ohio, I'm just not an IPA fan.  I understand what fans of the style like about it.  A good mix of hops can add complexity to the flavor and aroma of a beer.  I just don't care for the bitterness, in the same way many people don't like their food to be very spicy.  So the fact that I purchased and have brewed a recipe kit for a clone of Russian River's famous and well-loved Pliny the Elder DIPA would shock many who know me.

I decided to do this for three reasons.  First, I've never actually tried Pliny.  You can't buy it in Ohio, and I've never bumped into it in my travels out of state.  Since many consider it to be one of the best beers in the world, making a batch would be a way to sample it here at home.  Second, there are members of my family who prefer IPAs or drink only IPAs.  This would give me a beer to offer them when the come to visit.  Finally, I figured brewing a beer with so many hops additions would be an interesting learning experience that could transfer to other beers I might want to make in the future.

MoreBeer's Pliny kit was developed by the brewmaster at Russian River, so it should be as faithful a re-creation as any an homebrewer might make.  When it went on sale recently, I decided to pick it up and try it.

On August 29, 2015, I opened the package.  It contained:
The recipe sheets provided with the kit were a little confusing.  The main sheet with the ingredient list gave instructions for when the ingredients should be added, but split them into groups of like ingredients.  This meant you would need to bounce around as you looked at the sheet to figure out when to add what to the kettle.  The second sheet contained general brewing instructions for any beer, which had lots of conditional statements like "If the recipe includes X, add this now."  What I followed was this process:
When primary fermentation finishes in approximately 5-7 days, I'll then add 3 ounces of Columbus hops pellets, 1 ounce of Centennial hops pellets, and 1 ounce of Simcoe hops pellets to a sanitized muslin bag and drop into the fermenter for dry-hopping.  These will spend another 5-7 days in the fermenter before bottling.  I'll bottle with carbonation drops rather than the corn sugar supplied with the kit as I've had good results with the drops.

The instruction sheet says that the beer should have the following qualities:
My wort registered a gravity of 1.074.  I haven't done a color measurement.  The yeast was very happy with the beer and on the second day of fermentation leaked a bit of beer out the airlock and over the edge of the fermenter.

After seven days in the fermenter, I soaked a muslin bag in Star San and loaded the dry hop pellets into it.  The fermenter was opened and the hops bag dropped in, and the fermenter re-sealed.

According to BYO Magazine, the ideal dry hop timeframe is 3-5 days.  More than this can cause grassy flavors to appear.  On the third day of dry hopping, I transferred the beer to a sanitized bottling bucket and bottled it.  I carbonated with corn sugar and water, which I don't often do.  The yield for the batch ended up being 26 bottles of the 12-ounce size and 12 of the 22-ounce bomber variety.  Estimated ABV was 8.2% (final gravity 1.012).

The MoreBeer instruction sheets are decent, but I prefer to have my instructions in a form that shows me the exact order and timing of the brewing steps.  That meant I needed to sift through their general instructions and the recipe-specific instructions to work out what they recommended doing and when.  This took me several minutes to sort out, but made the brewing process much easier to follow.

As for the recipe itself, I've never brewed anything with this much hops in it.  The recipe contains almost a pound of hops in a 5-6 gallon batch, which is an incredible amount to me.  Beer Tools Pro estimated that the beer will be 147 IBUs, 7.78% alcohol by volume, 8.35 SRM, and original gravity of 1.079 (which is higher than my actual OG reading of 1.074).

Given the amount of hops and malt extract in the kit, it's priced reasonably on the MoreBeer web site, and even more so when you can pick it up at a discount.

How does it compare to a "real" Pliny? (See update below.)  I can't tell you, because I have never had one.  Looking at the Beer Advocate reviews for the real Pliny the Elder, we see tasters reporting the following flavor and aroma elements:
Here's how I and others have commented on the clone:
So it looks like the clone can be compared favorably to the original.

I'm not a big fan of the Pale Ale and IPA styles (and their kin) but I found this beer a nice change of pace from the maltier styles I normally drink.  I don't know that I'll ever brew it again, but I've learned to never say "never" in my lifetime.  Perhaps when this batch runs out I'll feel the need to do another hoppy one.

Update 8/6/2016: Thanks to a family member on the west coast, I recently acquired a bottle of the real Pliny the Elder beer. Another family member and I did a side by side taste test of the two. Because my bottle was almost a year old, the hops aroma had decayed almost completely, leaving the clone with a malty, sweet aroma. The real beer's aroma was much more complex, dry, and hoppy. The flavor of the two was extremely close. Neither of the tasters could discern a difference in hops flavor in the beer, though my older clone was understandably a bit sweeter. The main difference between the two was in the color. As you can see in the photo above, the clone beer is very much an amber color, nearly brown. The real beer is a gold color. The color difference, in large part, is probably due to this being an extract based beer and not an all-grain version. I suspect that the More Beer all-grain kit would yield a lighter-colored beer that, when fresh, is very much like the real Pliny the Elder.