January 24, 2016
In August 2015, I started looking for a good Belgian Quadrupel recipe.  I found a few, but only one of them intrigued me enough to make it.  It was called "Dixie Cup Boardwalk Belgian Quadrupel" and appeared in BYO magazine back in 2007.  Apparently it was given to attendees of a homebrew competition in Houston that year.

It took a month or two to gather up the ingredients.  The malts were easily found at RiteBrew.com, but it took me some effort to find Grains of Paradise.  It also took me some time to locate Turbinado Sugar until I thought to check the local Whole Foods.  At the last minute, I found that I didn't have the Perle hops the original recipe called for, and didn't have the full amount of Northern Brewer either.  My pre-boil gravity was on target, but at the end of the boil I found that I needed to make some additional modifications.  What appears below is the version of the original BYO recipe that I ended up making.

The Grainfather's Android app suggested using 5.5 gallons of mash water and 2.3 gallons of sparge water.  I measured out these amounts and set the controls to heat the mash water to 152F.  The sparge water was poured into a 5 gallon kettle and placed on the kitchen stove to heat to boiling.  PH Stabilizer was added to the kettle to aid in conversion.

The grain spent 90 minutes at 152F and 10 minutes in mash-out at 167F.  Sparging took about 30-45 minutes.  The resulting wort volume was 6.5 gallons according to The Grainfather's kettle markings.

The wort was brought to a boil and a 90-minute boil timer started in The Grainfather app.

At 30 minutes into the boil (60 minutes left), the hops pellets were added in a bag.

With 20 minutes left in the boil, the raisins were added, in a bag.

With 15 minutes left in the boil, a whirlfloc tablet was dropped into the kettle.

With 10 minutes left in the boil, the wort began recirculating through the counter flow chiller to sterilize it.

With 5 minutes left in the boil, the turbinado sugar, candi syrup, coriander, and grains of paradise were all added.  I checked the volume and it was around 5.5 gallons.  Gravity was considerably lower than the recipe called for (I showed 1.065 vs. the 1.090 the recipe expected).  I planned to increase it by boiling off more wort without the three bags in the kettle, but the bags had all dropped into the kettle and weren't easily retrieved anymore.  At this point I added more candi syrup and the brewer's crystals to bump the gravity up to 1.085 (these additions all appear in the ingredient list above).  This was still below what the recipe called for but I decided it would have to be close enough.

When the boil started, I sanitized my fermenter and blow-off tube.  I had these ready when the boil finished.  The Grainfather's pump transferred 5.5 gallons into the fermenter at 1.085 SG, 22 Brix, per my refractometer.

Owing to some sediment in the kettle (which lowered the flow out of the kettle) and the extra-cold (52F) tap water, I was able to pump wort directly from the kettle, through the counter flow chiller, and into the fermenter at about 66F.  I inserted my oxygen stone into the wort and began letting pure oxygen flow slowly through the wort for 2 minutes.  I removed the stone, pitched the two yeast packets, buttoned up the fermenter, and set up the blow off tube.

The original recipe called for 3 weeks at 72F.  After the brief stint at 80F, I reduced the temp back to 72F and held it there for three weeks.  The beer was racked to a secondary fermenter for a couple of weeks and then bottled.

At the time of this writing (Feb. 17) the beer is in bottles and conditioning.  I expect to be able to open the first sample at the end of the month.  If it matches the taste during bottling, it'll be a winner. 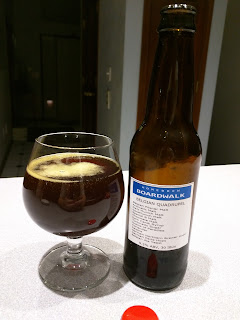 The photo at left shows a bottle of the brew with my board game themed label, poured into a glass.  The beer is mildly carbonated and does develop a thin (half-finger-thick) head but it doesn't last long.  I snapped the photo here really quickly and you see how little I got in the photo.

The beer pours a very dark mahogany.  Until you hold it up to a bright light, it's a dark brown color.  The head is thin, beige, fleeting, and leaves behind no lacing.

The aroma is a delicious mix of dark fruit (raisin), sweet malt, and just a hint of noble hops.

But hey, a beer can look and smell fantastic, but if it tastes like boiled dog blanket no one's going to want to drink it.  Fortunately, this beer can back up its other qualities.  The beer has a near-equal balance of warming alcohol, sweet malt and dark fruit, and hops bitterness.  Those who have tasted this one have marked it among the best I've made to date.  The warming note is pretty strong, probably because the fermentation temperatures were a bit high.  This adds a sweetness that balances well against the hops bitterness.  Raisins and plums come through in the middle.  The finish is a bit more bitter than I care for, but not beyond my tolerance.  I'm curious to see how it tastes in six months, if it lasts that long.

If I make this beer again... no, scratch that.  I WILL make this beer again.  You can count on it. When I do, I plan to make some very subtle changes:
This sounds like I think the beer needs a lot of improvement.  Trust me, it doesn't.  It's a delicious beer as-is, and the batch is disappearing from my cellar quicker than almost any other I've made.

Update 4/3/2016:  To give you some idea how well this beer is going over with my family, friends, and me, we've polished off about 25 bottles of it in about a month.  That's only because I'm consciously trying to keep it around to see how it tastes as it ages.  It's a beer I could happily drink any day of the week.  The only negative vote it's gotten was from someone who prefers his beers more dry and hop-forward.