January 13, 2016
In parts 1 and 2 of this series, I talked about my experiment to try making a sweet cider.  In Part 2, we talked about how to turn Ocean Spray Berry Medley Wave Juice Drink into a cider using a little yeast nutrient and some dry American Ale yeast.  In Part 3, we'll do the same thing with Welch's Essentials Peach Mango Juice Cocktail.  (It's the one in the middle below.) 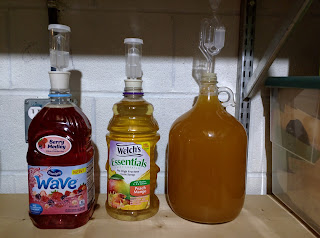 Here's what you'll need to reproduce this experiment:

If you want to bottle and carbonate the cider as I did, you'll also need:
Follow this process:
At the end of the fermenting or carbonating period, the cider is ready to drink.

The finished cider maintains the very pale yellow color of the original juice product.  It has an aroma of peach, mango, and green apple which is very enticing.  The flavor is a mixture of a Granny Smith apple-like tartness combined with a hint of sweet peach and mango flavors.  It would be fair to say it's pretty tart, similar to a Jolly Rancher green apple candy.  It is less sweet than the Berry Medley cider, but not dry like EdWort's Apfelwein.  The flavor is pretty simple and soda-like in nature.

In my case, I probably didn't ferment the juice long enough (even at 3-4 weeks).  Some bottles had a tendency to gush when opened.  The rest, like the one in the photo below, had a very champagne-like carbonation which created a finger-thick white head that vanished almost immediately.

It's a much less dry and less tart beverage than the same juice fermented with champagne yeast, so overall I like it much better.

If I brew this again, here are some changes I'm considering: 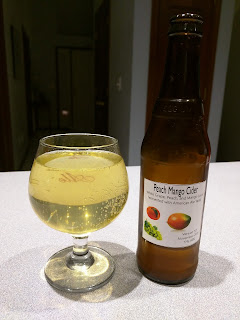 A nice thing about this recipe is that it's relatively inexpensive to tinker with.  Each 64-ounce jug of juice costs approximately $2.  A $5 packet of yeast is good for at least three batches, and if you harvest it, could go further.  So for about $4 you can make a half-gallon test batch, flavoring it as described above, and