January 17, 2016
In the fourth installment of this series is my first unique cider recipe, loosely based on some of the ideas in Mary Izett's book Speed Brewing.  I'm calling it CRAVE, which stands for:

The recipe is:
The process to brew it:
Taste Test and Post-Mortem 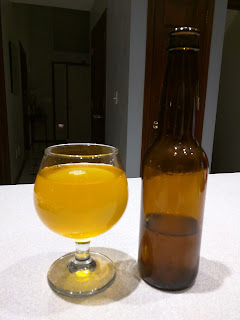 Overall, the finished cider was relatively dry, with some tartness.  The raisin, cinnamon, and vanilla did NOT come through at all.  The worst part is that fermentation seems to have brought out a very mild but detectable vinegar-like flavor.  Although I could probably give the cider to a number of people and they wouldn't notice it, once I picked it out I couldn't taste anything else.  I ended up pouring it down the drain.

I don't recommend brewing this one.  The raisins, cinnamon, and vanilla added nothing to it.  The result was slightly vinegary, and not particularly appetizing.  I don't know if I would do this one again or not.  Either way, it doesn't live up to the name.

If I did do this again, I'd probably leave out the raisins and vanilla and try it with just the cinnamon.  That might work better. I'd probably also leave the cinnamon in the fermenter so that the cider had every opportunity to pick up the flavor.

UPDATE 2/16/2016:  After the very unpleasant initial tasting, I didn't touch the bottles again for another month.  They sat in my cellar, undisturbed.  Last weekend, I decided to dump the remaining bottles down the drain and re-use the empties.  I opened the first bottle and took a whiff of it.  No hint of vinegar.  I poured it into a glass carefully to avoid the sediment.  It looked much like the photo above.  Tentatively, I sipped it.  The cider was a little tart, but not sour.  There was no longer any hint of vinegar to it.  Unfortunately, no hint of the cinnamon or vanilla either.  I wound up drinking it and not dumping the remaining bottles.  It goes to show something I once read about brewing... There are few mistakes a brewer can make that time can't correct.  So it seems here.  I still have no intention of making this recipe again, but I don't plan to dump it, either.