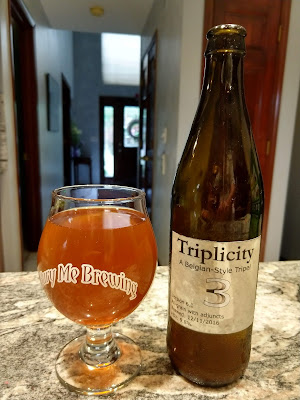 Back in May, I brewed my last attempt at a Belgian Tripel. All of the attempts so far have been good beers but haven't been exactly what I wanted... sort of  cross between Unibroue's La Fin Du Monde, Tripel Karmeliet, and Victory Golden Monkey. I want a mildly sweet base with notes of spice and fruit showing through. The recipe below is a variation on a La Fin Du Monde clone recipe I found, and marks the sixth time I've tried to brew a Tripel I really loved.

According to BeerSmith and the settings for my equipment and process, the above should yield a beer with the following characteristics:

A 90-minute mash at 150F was followed by a 10-minute mash out at 167F.  The 2.5 gallons of sparge water were transferred onto the grain basket to sparge the grain.

Pre-boil volume hit 6.6 gallons at a gravity of 14.1 Brix prior to the addition of the sugar and syrup.

The recipe I started with for this one included a 90-minute boil. I tacked on an additional 15 minutes. For the first 15 minutes, no hops were added. The goal was to improve clarity.

Post-boil volume was 6 gallons at a gravity of 20.9 Brix.

Owing to a lot of sediment in the kettle, I ended up with about 4.5 gallons in the fermenter. I decided not to transfer the really sediment filled wort at the bottom, so I lost about a half gallon there. Since I wanted a clear beer, I decided it was worth the trade.

The dry Safbrew Abbaye yeast was pitched on top of the wort, the fermenter sealed, and the airlock inserted. Within just a few hours, the airlock was already bubbling.

As I tend to do with Belgian style beers, I do not plan to control the fermentation temperature on this batch. I'm leaving it in the 65-68F basement over the next week or two, allowing it to ferment at whatever temperature it reaches. In my experience, I tend to get the best flavor from Belgian yeast when it's allowed to take care of itself.

After 1-2 weeks in the fermenter, I'll transfer it to my mini-fridge and get it down as close in temperature to 32F as I can. I'll leave it there for at least a week. This should drop out a lot of the haze-inducing proteins and help clear up the beer. The Clarity Ferm should help with this as well, and will remove most of the gluten.

My plan then will be to bottle it with corn sugar and rehydrated champagne yeast to carbonate, as this has been working well for me recently. The beer will spend a week at 76F, then tested to ensure it's carbonated. If so, it will be transferred to a refrigerator to spend 1-2 weeks clearing up.

Update12/28/2016: Tonight I got the beer into bottles. It had reached what my refractometer measured to be 9.1 Brix. After some calculations in BeerSmith, that worked out to a final gravity of 2.1 Plato and a final ABV estimate of 9.76%. Before brewing, BeerSmith and I had estimated a final ABV around 9.4%. The finished beer was extremely cloudy, almost as though it had been brewed with wheat and a not-so-flocculent yeast strain. That may settle out in conditioning but I'm not expecting it to at this point. The fermentation must have been quite intense. With approximately 5 gallons of wort in the fermenter, the yeast and sediment on the sides of the fermenter reached as high as the lid in the 7.5 gallon fermenter.

On December 28, the beer was gravity-transferred into a stainless bucket into which 5 ounces of corn sugar dissolved in 16 ounces of boiled water had been placed. Pre-bottling volume in the bucket was about 4.75 gallons.

I placed as many of the bottles as would fit into an insulated cooler with a seedling mat heater and temperature controller. They'll be kept at approximately 76F for a week, when I'll move them out and swap in a new set of bottles. This has proven to provide good carbonation in the past.

After two weeks of bottle conditioning, I'll chill and test one of the bombers. If it's properly carbonated and tastes good, I'll move the rest into a refrigerated space to chill them. That may clear up some of the cloudiness.

Update 1/4/2017:  I chilled one of the bombers and opened it. There was a small amount of carbonation, enough to make the bottle hiss slightly but not enough to generate a head when poured into a chilled glass. I'm going to give it another week in the bottles and see how it does.

As is often the case for me, I ended up substituting a couple of ingredients here. The original recipe I found called for clear candi sugar rocks and didn't include cara-pils malt. I decided the golden candi syrup would impart a nicer flavor and wanted the cara-pils to help improve head stability in the finished beer. The BeerSmith estimates provided with the recipe take these substitutions into account.

The brewing process went very smoothly this time, apart from the kettle nearly boiling over at one point while I was emptying out the grain basket. I came out a little high on gravity and low on volume in the fermenter, but these weren't entirely unexpected. I added 15 minutes to the boil (without hops) to help get some proteins out of the beer, which would have reduced the volume by perhaps a tenth of a gallon. In addition, I could have hit my fermenter volume if I'd been willing to allow the pump to suck up a lot of the sediment and protein in the bottom of the kettle. I probably lost a half-gallon to that decision.

Update 12/28/2016:  After bottling the beer, I took the last of the beer from the bottling bucket and poured it into a container I could drink from. The aroma was a combination of bubblegum, fruit, and sweet malt. The flavor at that point was extremely close to my ideal tripel. It's mildly sweet but not sugary. There is plenty of fruit and citrus from the coriander, orange peel, and yeast. If it turns out even remotely close to this initial taste test, I may have found my perfect Tripel recipe. If you like a more dry, hoppy tripel, this is not the recipe for you.

Update 02/13/2018:  I placed a bottle of the beer in the refrigerator a couple of weeks ago. Tonight I opened it.  It poured a very bright, clear gold with minimal carbonation.  The sweetness level is right about where I would want it. The fruity element is more clear, and the hops bitterness is balanced well against the sweetness.  It needs more carbonation, but is otherwise quite close to what I want.