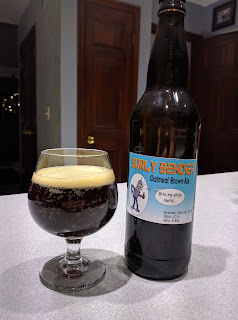 Surly Brewing Company of Minneapolis, Minnesota, is well respected in the craft beer community for its many fine beers. None of them are available, as of this writing, in Ohio. I ran across a clone recipe on Northern Brewer, supposedly provided by the brewmasters at Surly, for their Bender brown ale. I liked the general description of the beer and its ingredient list, so I decided to brew my own version.

At left, you can see the finished beer and the Futurama-inspired label I came up with for it.

The finished beer is a dark brown color with thin beige head that doesn't last more than a few seconds. As a first attempt at a brown ale, I'm happy with it.

I've never had the actual Surly beer, so it's fair to say this is not an exact clone. It's more like my interpretation of what I imagine the real beer to be like.

If you look up the clone recipe on the web, you'll find that it calls for Columbus hops rather than Nugget, and WLP007 British Ale Yeast instead of S-04. I had used my Columbus hops in another recipe, but had just received a package of homegrown whole Nugget hops from a friend. Since Columbus is a descendent of Nugget hops, I decided to swap them out. Unfortunately I had no way to know what alpha acid percentage the homegrown hops had, so I estimated them at 14%. Given that, the BeerSmith estimates for the brew are:


Following were the actual characteristics of my brew:
The Mash

The mash water was heated to 154F. Grain was then gradually added and stirred in. The recirculation arm was setup and the pump kicked on. Mash time was 60 minutes. At the end of mashing, the wort was heated to 168F.

The 168F sparge water was gradually added after the grain basket was lifted out. I'd estimated having 6.6 gallons of wort pre-boil but actually had about 6. I added enough water to get to 6.6 gallons and set The Grainfather to boil. Pre-boil gravity was 11.5 Brix, well below the estimate of 14.1 from BeerSmith.

The recipe called for first wort hops using Columbus. I used the whole Nugget hops instead, adding these as I removed the grain basket and set the kettle controls to boil.

A 60 minute boil with the following schedule was used:
Post-boil volume was 6.1 gallons, a little below the estimate, but the gravity hit 13.9 Brix.

Since it's winter here in Ohio, the tap water is nice and cold. Wort pumped into the fermenter from the kettle at 68F. I added White Labs Clarity Ferm and the packet of S-04 yeast as the wort pumped into the kettle, hoping this would help to mix both in very well and aid fermentation.

My temperature control system was set to keep the beer at 68F, cooling and heating as needed. Since the basement is around 64.5F right now, The cooling probably won't be needed much, probably only during the high-point of fermentation.

The beer was allowed to ferment until 12/31/2016 in the primary fermentation vessel.

After 12 days, the beer appeared to stop fermenting. I boiled 5 ounces of corn sugar in water to prime the beer for bottling and transferred it into the bottling bucket using gravity and a plastic hose.

The yeast cake in the bottom of the fermenter was dense and had to be scooped out. There was around a 3-inch band of dead yeast around the top of the fermentation bucket, indicating a pretty healthy fermentation.

The finished beer has a great malty aroma with a touch of dark fruit from the Special B. The flavor has just a hint of sweetness to it, with a nice roasty grain backdrop. The hops presence balances the malt nicely to my taste. It may be the best brown ale I've tasted, given that it was mostly flat and warm at the time. I'm looking forward to the finished product.

I'm planning to give the beer two weeks in my 76F "hot box" to ensure carbonation, followed by at least two weeks in a refrigerator to hopefully get nice and clear. Then I'll be back to share tasting notes and thoughts for future batches of the beer.

The smell coming from the kettle when I brewed this one was outstanding. It had to be one of the best-smelling worts I've ever produced. I'm hopeful the yeast will like it and do its thing to turn this into a great brown ale.

Brewing with the homegrown hops was a small gamble, not knowing how bitter they actually are, but since I'd calculated my additions based on minimal bitterness for the style, I figured the worst-case scenarios were that it would be only very mildly bitter (which is fine for me) or if they were unusually bitter for Nugget hops, they would still not go beyond the style guidelines.

A taste of the unfermented wort showed a definite hops presence, but not an excessive one. The finished wort also had a raisin-like aroma to it, possibly from the Special B malt.

The finished beer is quite good. The hops and malts appear to be in good balance, with neither really overwhelming the other. The flavor has some subtle roasty notes to it. We've found it very easy to drink and have already gone through a few bottles before cold conditioning has finished.

If I brew this again, I think I would increase the amount of Special B slightly and possibly mash at a slightly higher temperature to hopefully bump up that element of the flavor and increase the body a little. I might also add in some Cara Pils or Melanoidin malt to improve head retention. I might also bump the hops quantity up about 10-15% to give it a little more of a bite. Those of you who like hoppier brews might even want to increase them a lot more.