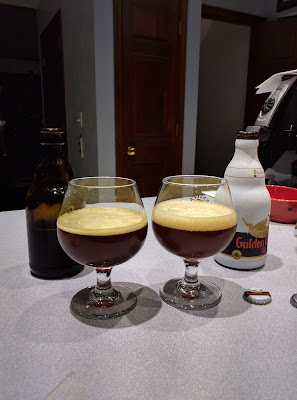 About two years ago, I decided to try my luck at brewing a Gulden Draak clone. Gulden Draak is one of my favorite Belgian beers, but its price makes it one that I don't drink nearly as often as I'd like.

To do that particular clone, I cultured up yeast from the dregs of four bottles of the real beer and tossed it in an extract beer I'd brewed based on a recipe in a book.

This time around, I wanted to do an all-grain clone and see if commercial dry yeasts would result in a beer that was close to the original.

As you can see in the image at the left, the clone came out very close in color to the original beer. Unfortunately, while there were similarities in the flavor and aroma, in those respects the clone needs more work.

The recipe below is derived from one I found somewhere... in a book or online.

Per BeerSmith, with my equipment profile, this beer is estimated to have the following characteristics:
When I finished brewing, these were my actual results:
I came out a little short on gravity, which means I need to do some adjusting in BeerSmith so I can dial in the estimates in the future. The lower gravity is possibly due to a reported reduction in The Grainfather's efficiency for grain bills over 11 pounds.

Mash water in The Grainfather was calculated to 6.4 gallons, but I dialed it back to 6 for easier measurement.

Sparge water was calculated at 1.6 gallons, which I adjusted to 1.5 gallons.

The grains were crushed, mixed, then scooped into the 156F water and stirred to ensure they were all moistened properly. The Grainfather's recirculating pump was engaged and the wort left to mash for 90 minutes.

After the 10 minute mash-out, 1.5 gallons of 168F sparge water went over the grain to rinse out the last of the sugars.

BeerSmith estimated pre-boil volume was 6.25 gallons. My actual volume was: 6.4 gallons after adding some water.

With the grain sparged and discarded, the wort was brought to a boil. Boil time was 90 minutes.

For the first 30 minutes of the boil, no hops were added. This was done to help clarify the wort a bit and hopefully reduce chill haze, which is something I see frequently with The Grainfather. In a beer this dark, that was probably unnecessary but I decided to do it anyway.

The last 60 minutes of the 90-minute boil went as follows:

Post-boil volume was 5.8 gallons at an original gravity of 22.0 Brix.

Wort was chilled to 68F via the counter flow chiller. Fermenter volume was a touch over 5 gallons. Pure oxygen was added for 60 seconds, then the yeast and White Labs Clarity Ferm were added.

The yeast was permitted to ferment at its own natural temperature with no attempt to control the temperatures. This is my standard approach for Belgian style ales. I saw a slight temperature increase in the wort about 3 hours out, and frequent airlock activity at the 7-hour check.

Update 1/16/2017: While bottling, it was clear that the fermentation was extremely vigorous. There was the usual ring of yeast on the inside of the fermenter, but it had gotten all the way to the lid of the 7.5 gallon fermenter and into the bottom of the airlock. A blow-off tube wouldn't be a bad idea in the future.

This brew, weighing in at over 16 pounds of grain plus two pounds of adjuncts, pushes the 20-pound grain bill limit of The Grainfather. Getting the grain stirred into the mash and the wort recirculating was a bit of a challenge, but The Grainfather handled it fine.

Something I've learned that saves me some elapsed time in brewing is to clean as I go. For instance, when I've finished sparging, I drop the grain basket into a stainless kettle that's large enough to hold it. I scoop the spent grains out, into a plastic bag inside a trash can. While I'm doing this, the wort is heating to boiling temperature. By the time the wort hits the boil, I've dealt with the spent grain and rinsed the grain basket, lid, and kettle. Once the hot break is done and the risk of a boil-over eliminated, I mix up PBW in the stainless kettle and clean the grain basket, lid/bottom, tubes, and anything else I'm finished with. Generally, by the time the boil is over, all I have left to clean is The Grainfather's kettle itself and the few plastic containers I use to measure and hold hops additions, Irish Moss, etc. The leftover PBW in the kettle is used to clean up The Grainfather itself.

12/22/2016: Within about 7 hours the beer was fermenting well. The fermenter temperature remained pretty low for the first 12 hours, eventually climbing from 68F to around 73F. Airlock activity seemed to stop around there. Several hours later, it picked up again and the temperature seemed to climb into the 77F range. I think it's safe to say the yeast are happy.

12/23/2016: I opened an actual bottle of Gulden Draak last night and compared the color to a sample I removed from the kettle during brewing. The color of the two is very close, so I am hopeful there might be similarity in the flavor as well. Won't know for a while, of course.

01/16/2017: The beer was bottled yesterday with 5.3 ounces of corn sugar and Montrachet wine yeast for carbonation and conditioning. It's said that the actual beer is conditioned with wine yeast so that's what I chose to use here. The yield was 44 bottles varying in size between 12 ounces and 22 ounces. The bottles were moved to my "hot box" (insulated cooler with a heating element inside) where they'll stay at 76F until I'm ready to test carbonation. The beer at this point is very cloudy, and is something of a reddish brown color. It has a fruity aroma and (even while flat and warm) a decent flavor. I don't know that it tastes at all like a real Gulden Draak at this point, but that may change with conditioning, carbonation, and cooling.

If I brew this again in the future: 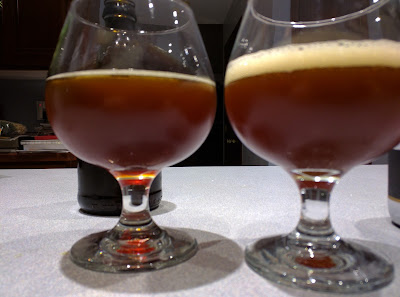 At the right is a photo showing the clone beer on the left and the real Gulden Draak on the right. The two are very close in color.

The clone needed more carbonation and its head didn't last as long as the real beer's, as you can see in the photo. The real beer was poured first and had a head far longer. To correct that, I'd probably increase the Melanoidin Malt the next time, or swap out some of the 2-row Pale for Cara-Pils malt.

The real Gulden Draak aroma is very much sweet dark fruit, like raisins, figs, and/or plums. The clone's aroma is more caramel malt. Switching to one of the liquid yeast strains like Wyeast's Forbidden Fruit might help bring the aroma closer.

The flavor of the real Gulden Draak is sweet, loaded with dark fruit, and has the faintest warming note to it. The clone's flavor is more caramel, has a stronger warming note to it, and only a small amount of fruitiness. I think that adding some Special B malt to the mix might bring out that flavor, as well as perhaps increasing the D-90 syrup a bit. While I like the clone's flavor, it doesn't hold a candle to a real Gulden Draak.

The bitterness level was about right, so I wouldn't tweak that element of the recipe at all.

The changes I plan to make in version 3.0 are:

You might think, from this volume of changes, that the beer isn't very good. That's not true. It's very drinkable and enjoyable as-is, it's just not the Gulden Draak clone I was looking for.