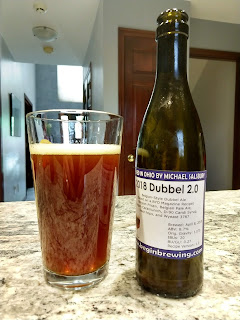 As I've mentioned before, I've been trying to perfect (to my taste, at least) recipes for the Trappist Single, Belgian Dubbel, Belgian Tripel, and Belgian Quadrupel.  The recipe I've had the most trouble with is the Belgian Dubbel.  I've made several, and they've all disappointed me, whether they were my own recipe, a published clone recipe for a commercially-available Dubbel I like, or any other.  In many cases, they come out too light in color, with little or no dark fruit flavor. In others, they come out dry or overly bitter.  My most-recent attempt before today had a practically perfect color but still missed the prune/plum flavor I've been looking for.  Today's recipe began as a BYO Magazine recipe for the Belgian Dubbel style, modified a bit.  I replaced the hops with my preferred blend and changed the candi sugar rocks out for syrup.

Used the Zymatic High Efficiency mash profile with the two main mash step temperatures changed. The first temperature was changed to 144F, and the second to 158F.

A 90-minute boil was used, with 30 minutes of pre-hop boil time.

The D-90 syrup was added to the beer after the boil, just before the wort was cooled.

The Picobrew recipe crafter estimates that the beer will have the following characteristics:
After brewing, I measured the wort volume at 2.5 gallons and the gravity at 17.8 Brix, which BeerSmith adjusts to a value of 1.075 SG. That's a touch higher than the 1.072 SG I expected. Bitterness recalculates to 20.3 IBUs and Brew House efficiency to 70% for this batch.

The wort was chilled to 68F using a sanitized immersion chiller and transferred into a sanitized fermenter. When the yeast packet finally swelled, it was added to the wort along with the White Labs Clarity Ferm and the fermenter sealed.

The temperature controller was programmed to keep the wort at 71F for 3 days, then raise it to 80F for the next 10 days. That should ensure complete fermentation, with the 80F temperature providing a little stress to the yeast so that it delivers additional aromas and flavors.

I discovered a small crack in the Picobrew Zymatic's step filter, which I snapped pictures of and sent to Picobrew support.  Hopefully they'll be able to replace it, as the filter did leak during the post-brew rinse and clean.

04/08/2018:  The beer was brewed, yeast pitched, and temperature control configured.

04/09/2018:  Upon arrival in the basement, I noticed that the temperature controller was registering 64.5F as the wort temperature. That's much lower than the 71F I had configured. At this point I realized that was because I'd unplugged the heat wrap while configuring the controller. It had been set for a Saison that needed temps well outside this yeast's range, so I unplugged the heat wrap to prevent cooking the yeast. I just forgot to re-plug it.  I corrected that and ensured that the temperature was climbing back up to the 71F set point before going to bed.

06/25/2018: The beer pours a coppery brown with thin off-white head that doesn't last long or leave behind the characteristic Belgian lacing. The aroma is malty with some dark fruit. The flavor starts malty and mildly bitter, without a touch of dark fruit. Dark fruit is there, but subtle. I get more burnt sugar, I think, than dark fruit. It's not a bad beer or a bad Dubbel, but it's not what I envision my ideal Dubbel tasting like.

If I had to brew this one again, I'd replace part of the Pilsner malt with Cara-Pils to help the beer develop a nice creamy head and some lacing. I'd consider replacing some of the D-90 syrup with some Special B malt, enough to get the color a bit more ruby and hopefully amp up the dark fruit flavor. I'd be looking to hit a color in the upper 30's of the SRM scale.