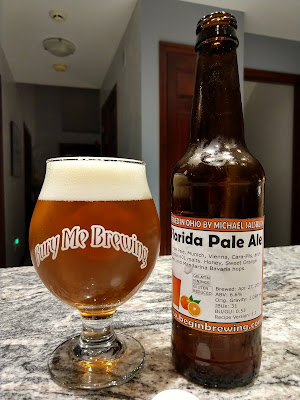 A little over a year ago, I came up with a blonde ale recipe based on little more than the fact that one of the home brewing shops online had Mandarina Bavaria hops on sale. I'd never had a beer made with the hops, but their reported mandarin orange flavor sounded like it might make a great beer. I decided to pair it with some orange blossom honey I'd purchased as well as some dried orange peel. I combined all this into a blonde ale recipe and hoped it wouldn't be too much orange. It wasn't.  That beer took second place at the 2017 Ohio State Fair Home Brewing Competition in the fruit beer category.  It's been popular with friends and family, too.

I decided to brew a new batch this year, maybe for competition, or maybe for consumption only.  At brewing time, I realized I did not have Bitter Orange Peel or Orange Blossom Honey, so I substituted Sweet Orange Peel and "generic" (natural) honey.

The Zymatic recipe crafter estimated that the beer would have the following characteristics:
When the brewing process ended, I pumped the wort into a kettle for cooling with my immersion chiller.  As I did so, I added the 12 ounces of honey.  While chilling, the beer was stirred constantly and this should have integrated the honey into it well.

When the brew finished, I measured the following:

04/27/2018:  The beers I've made in the Zymatic to date have been somewhat inconsistent.  I went into this brew expecting less than 2.5 gallons, despite specifying that amount in the recipe crafter and even over-adding water slightly to ensure the machine didn't run too low and start sucking in air.  I ended up with 2.3 gallons at a higher gravity, but that diluted down to the target volume and gravity more or less perfectly.  I have noticed that most seem to be more bitter than I expect.  It's worth noting that the Zymatic recipe crafter estimates this beer at 24 IBUs, while BeerSmith estimates something around 32 IBUs for the same volume, gravity, and ingredients.  If this beer also comes out unusually bitter, I may use BeerSmith to calculate hop amounts in the future.

04/29/2018:  The airlock shows steady activity on this one. I haven't taken a taste sample of it yet, preferring to wait a little longer to let it finish out more of the primary fermentation.

05/08/2018:  To ensure that I have bottles ready for competition, I filled six bottles tonight. Each was dosed with four small tablets of Brewer's Best carbonation drops. This is supposed to yield a "medium" level of carbonation consistent with the style.  The refractometer registered 6.8 Brix, which BeerSmith adjusts to a final gravity of 1.009 SG (almost exactly the gravity I expected).  The beer is a bit bitter at this point, but I find that carbonation offsets that a little, so I'm hoping it will come out balanced at competition time.

05/16/2018:  The beer has turned out much more like a Pale Ale than a Blonde Ale, so I'll be entering into competition and sharing it with others on that basis. I'll need to re-brew it with less hops.

05/20/2018: Here's my self-scoring on the beer relative to BJCP criteria combined for the Pale Ale and Fruit Beer categories.


It will be interesting to compare this score with those from the judges at the Ohio State Fair.