April 27, 2019
I've been able to brew Trappist Single, Tripel, and Quad (Dark Strong) ales that I'm happy with. One of my Tripels placed at the Ohio State Fair. Two of my Dark Strong Ales finished in the top three at Barley's Ale House. The one Trappist style I've brewed repeatedly but never been happy with is the Dubbel.

It's not that I don't know what I want from a Dubbel. I want a nice deep ruby red color with a decent head and clarity. I want a noticeable aroma of dark fruit (prune/plum) and noble hops (preferably Saaz). I want a touch of sweetness, but not to a cloying degree, to bring out that dark fruit. A mild phenolic quality, manifesting as peppery or clove-like notes would be ideal. The body should lean toward medium. The beer should finish dry and clean.

I found a recipe on Beer and Brewing that is attributed to Andy Mitchell, a brewer at New Belgium in Fort Collins, Colorado. I'm swapping out the East Kent Goldings hops (which I've never liked in a Belgian style beer) for a mix of Whitbread Goldings for bittering and Czech Saaz for flavor/aroma. I'm also going to add some chopped raisins and prunes in the whirlpool to see if I can't dial up the dark fruit flavors in the finished beer. A locally-made Dubbel I tried a few years ago included plums in the recipe, and it was one of the best Dubbels I've had, so I'm hopeful that

BeerSmith estimates the beer will have the following characteristics:

The following mash schedule was programmed into the Brewie+ system:
Boil Schedule

To enhance the malt complexity in this malt-forward style, a 90-minute boil will be used for this batch, as below:
The wort will be chilled to 63F and transferred to a sanitized plastic bucket fermenter.

The yeast will be allowed to free-rise until approximately 67% attenuation takes place, at which time I'll raise the temperature to 73F and hold it until final gravity is reached.

04/27/2019:  If you look at the Beer and Brewing recipe, you'll notice I swapped some of the Munich I malt for Honey malt. I did this, honestly, because I'd run out of Munich I and had some Honey malt to use up. They're by no means ideal substitutes, but I thought it would be interesting to see how it turned out.  I also swapped East Kent Goldings in their recipe with WGV and Saaz, which is more to my liking in Belgian styles.

My yeast package was older than I realized, so I smacked the nutrient pack and shook it up. I allowed it to warm up while I ran a sanitizing cycle on the brewing system and prepared the ingredients. In the end, I decided it would be best to drop the yeast into a starter and raise up the cell population before pitching it into the wort. To help things along, I poured a bottle of Trappistes Rochefort 10, then swirled the last half-inch of it until the yeast seemed to be in suspension and added that to the starter as well. (This should be more or less the same yeast strain as 1762, by the way.) 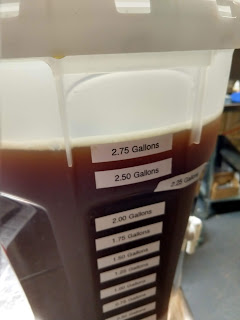 At the end of the process, I pumped approximately 2.25 gallons into the fermenter at a gravity of about 1.080 SG. I diluted this down with distilled water to a gravity of 1.068 and a volume of 2.75 gallons in the fermenter.  All of this impacts bitterness, dropping the beer to 19.1 IBUs from the original 21.5 IBUs. The increased gravity also brings the estimated ABV up to 8.0% from 7.8%.  If it ferments out as expected, this is going to be a fairly strong Dubbel.

I sealed the fermenter without pitching the yeast, as the package of 1762 had a distinctly autolyzed aroma to it when I opened it. Despite that, I dropped it into a 1 liter starter wort to see if there is enough viable yeast there to ferment the beer. If not, I'll either use the package of Wyeast 3522 Belgian Ardennes yeast I have on hand or make a trip to the LHBS for a new package of 1762 or White Labs WLP540.

04/28/2019:  The starter of Wyeast 1762 didn't seem to raise any yeast, even after dregs from a bottle of Trappistes Rochefort 10 were added to it. My package of Ardennes yeast was also old, so I ended up pitching a package of dry Safbrew BE-256 yeast, which is a Belgian strain that should be the most suitable among those I have available.

05/05/2019:  The gravity has been slowly dropping since the BE-256 was pitched into it.  The Tilt Hydrometer readings have shown a continued decline. Here at the lowest hydrometer readings for each day since the yeast was pitched:
Based on this, it looks like there is still a slow fermentation going on, so I'm hesitant to bottle the beer for fear of overcarbonating it.  (I've had a few beers do this recently, and suspect that bottling too soon is the issue.)

05/08/2019:  Gravity has continued to hold at 1.013 SG.  I've raised the temperature on the fermenter to 77F to ensure that there is no sugar remaining to ferment before bottling.  Concerned that the issue in recent overcarbonation might be a bacterial residue in the bottling wands, I've ordered replacements and will not bottle this beer until they arrive.

05/09/2019:  I've raised the temperature for the beer to 77F to help the yeast finish cleaning up before bottling.

05/11/2019:  The beer has held at 1.013 SG now for a week, so I think it's safe to call this "final gravity" for the batch.  BeerSmith estimated the final gravity at 1.007 SG, but it may have been assuming a lower mash temp than I used, or its estimates for the yeast strain were off.  Either way, I think we're ready to bottle this one.

05/14/2019:  I bottled the beer today. It was in my 2.5 gallon translucent plastic fermenter with the screw-on lid, pictured above, passed through the new stainless bottling wand.  Sanitized metal tongs were used to drop 3 carbonation tablets into each regular bottle and 4 into each Belgian style bottle.  Yield was 28 twelve ounce bottles. The bottles were placed inside a sealed plastic cooler with no heat.

05/29/2019:  A bottle of the beer was placed in the freezer for an hour tonight to give it a chance to chill to a drinkable temperature. This will be an experiment to see if there is any obvious bacterial infection.  If so, the fermenter and/or the thinner plastic bottling wand is infected. I've already trashed the bottling wand, but I haven't cleared the fermenter of infection yet.