April 25, 2019
I am starting to feel cursed that I am unable to brew an Irish Red Ale, a style that I really enjoy drinking.  My first attempt brewed fine but didn't taste like I thought it should (and it wasn't my recipe). The second attempt had a volume and gravity issue that watered it down. It was drinkable but hardly memorable. The third attempt stalled during fermentation at too high a gravity. I tried to fix that with glucoamylase and ended up with a "Brut Irish Red Ale" that was drinkable but not what I wanted, either.  This time I am hoping to nail it.

I'm creating my own recipe this time around, loosely based on those I've seen online. I'm using Maris Otter for an authentic base, layering on some Caramel 40L for a caramel flavor, 120L for some color and dark fruit, roasted barley for more color and a touch of flavor, and Melanoidin malt for body, red coloring, and foam stability.  I'm using a single dose of East Kent Goldings for authentic bittering, Brewtan B for shelf stability, and Irish Moss to help brighten it (with gelatin in secondary if needed).  As usual, I'm including Clarity Ferm to reduce gluten so that my gluten-intolerant friends are able to enjoy the beer as well (so far they've found it drinkable and enjoyable).

Here is the mash schedule I'll be using:
The point of the complex mash it to help bring out some malt complexity in the finished beer. Competition judges have criticized some of my recent British styles for a lack of malt complexity, so I am hoping to dial that up here and see how it goes.

I'm going with an 80-minute boil on this one to try to leverage kettle caramelization to enhance malt complexity:
Wort will then be moved to a sanitized and cleaned fermenter with temperature control.

The yeast's optimum range is between 62F and 72F.  I plan to aim for a temperature of 67F and hold it there through fermentation, perhaps raising it to 72F toward the end, to help the yeast clean up and reach final gravity. The yeast nutrient is there to help it. I'll be pitching the entire package to ensure a healthy yeast population, since I don't plan to brew any more Irish styles for a while.

If the beer seems hazy, I may drop in gelatin finings to clear it up before bottling.

04/25/2019:  Ingredients were gathered and loaded into the Brewie+.  I programmed it with the mash and boil schedules and waited near it while it loaded the mash water, returning a bit later when it loaded sparge water. I adjusted the volumes to ensure that they were on track, but ended up adding some to the mash to cover all the grain.

After brewing, gravity registered 1.045 SG on the Tilt Hydrometer and the temperature read 75F. I pitched the yeast and set the temperature control to 67F.  I ended up with over 2.75 gallons of wort, something along the lines of 2.8 gallons. 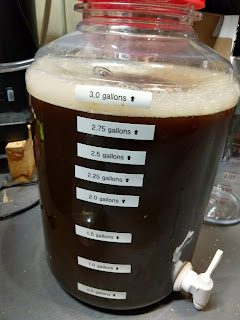 05/06/2019:  The beer was bottled using three small carbonation tablets per bottle (low carbonation). A few bottles were dosed with only two tablets, and one bottle with a single tablet. I've had some beers lately start gushing out of the bottle unexpectedly. While I suspect that this is the result of bacterial infection in one of my bottling wands, there is a possibility that it's a combination of being bottled before final gravity was reached and/or being over-primed. If it's a bacterial issue (and the bottling wand I used was the infected one), then even the 1-tablet and 2-tablet bottles in this batch should gush when opened. If it's an issue of final gravity and/or over-priming, then the 3-tablet bottles might gush - but the 1 and 2 tablet bottles should have a more reasonable level of carbonation.

05/12/2019:  Unfortunately, I've had yet-another failure in the Irish Red Ale style. This time around, I I learned that the bottling wand I used for this batch had become infected with an unknown strain of bacteria. Every bottle of this beer gushes itself empty when opened.