How to Determine if Your Fermentation Temperature Control System Works

April 17, 2016
If you've been home brewing for any length of time, you know the importance of maintaining an appropriate and consistent temperature during the fermentation of your beer.  The goal is to keep the beer within a temperature range that allows your yeast to work its magic without getting too hot (and thus generating off-flavors) or too cold (and going dormant before finishing the job).

I do all of my fermentation in my basement, which maintains a year-round temperature in the low-to-mid 60's (note:  all temperatures referenced in the post are in Fahrenheit unless otherwise stated).  I also have switched to only stainless steel fermenters, which I personally prefer to glass or plastic.

A few months ago, I acquired a fermwrap heater ($23.99) and an Inkbird temperature controller ($38.99 or less when on sale periodically).  I'd been using these to keep my fermentation temperatures from getting too low, but worried that during vigorous fermentation that the yeast could be getting too hot.  I wondered if I needed to "up my game" by adding a fermentation chamber that could both heat and cool, or if the low ambient temperature in my basement (combined with the conductive properties of the stainless steel) might be enough to prevent overheating.

To test this, I purchased an inexpensive temperature monitor ($23.99) from Amazon.  This model had a probe that I could fit in the fermenter's thermowell along with the probe for the temperature controller.

To use this particular monitor, you begin by installing a battery in the monitor.  Then, install (Windows only, I think) software on your computer.  Attach the USB cable to the computer, and then to the temperature monitor.  The software allows you to specify the frequency with which readings are taken, the delay time before readings start, the temperature unit (Fahrenheit or Celsius) to be used, and a unique name to assign to readings taken by the monitor (e.g., "Pale Ale" or "Fermenter 1").  When you've finished gathering readings, the software also allows you to extract the data from the monitor and store it in Excel, PDF, Word, or Text formats for later use.  The monitor can store up to 16,000 readings in its internal memory.  This works out to about 11 days if readings are taken at one-minute intervals, longer if readings are taken at longer intervals.

I configured the monitor to take readings every minute, in Fahrenheit.

Yesterday, I extracted the readings from the temperature monitor and saw what I hoped to see, depicted in the graph below: 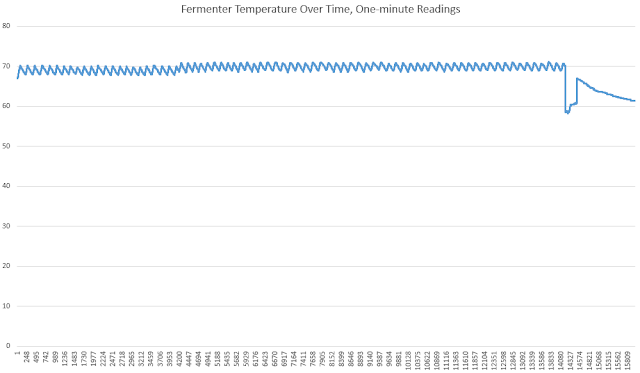 The sawtooth pattern you're seeing here is a result of the temperature controller using the fermwrap heater to heat the beer to the 70F target temperature, followed by a cooldown of the fermenter toward the basement's ambient temperature.

You'll notice that about a quarter of the way through the chart that the temperature increases slightly. That's because I adjusted the controller to warm the fermenter a bit more, to hopefully help the yeast along.

You can also see near the right-hand side of the graph that there was a sudden drop in the readings.  This is was the day I transferred the beer to a secondary fermenter.  I disconnected the temperature probe and fermwrap while I transferred the beer to the secondary, so it showed a sharp drop because it wasn't in the fermenter anymore.  A while later, when I reinserted the probe into the secondary fermenter's thermowell, you see the temperature go back up.

The gradual drop-off at the end of the graph is the result of electing not to keep the fermwrap and controller plugged in during secondary fermentation. Over a few days, the temperature in the fermenter began dropping to the basement's ambient temperature of around 63F at the time.

What did I learn from this experiment?


Given that this is only a set of data for a single fermentation, I can't draw any general conclusions yet other than that it does appear that my temperature controller and fermwrap heater are doing the job they're designed to do. It will take additional testing to determine if these results are repeatable across other yeast strains and beer recipes.  If so, I won't need to invest the time and effort into a cooling option for ale fermentation.