April 24, 2016
Like most craft beer fans, I've read for years about the amazing Westvleteren XII beer.  It's said to be one of the best beers in the world, and certainly one of the best of the Belgian monastery beers. Unfortunately, I've never seen a bottle of it for sale in Ohio.  Ordering it over the Internet would mean spending as much as $25 per bottle plus shipping, which seems a bit excessive.  What's a home brewer to do?  Brew his own, of course.

A number of people have told me that the folks at the CandiSyrup.com site have done a great job figuring out how to clone and brew many of the world's best beers.  What follows here is their recipe for a Westvleteren XII clone beer, adjusted slightly because I discovered at the last minute I was missing one of the ingredients.

Per BeerSmith, the beer's numbers are:
I brewed the beer in the iMake RIMS system The Grainfather and fermented in an SS Brewing Technologies 7-gallon Brewmaster Bucket.  Temperature control on this will be heat-only, using an Inkbird ITC-308 controller and a fermentation wrap heater.  Past experience has shown that this, in combination with my relatively low ambient basement temperature, keeps the fermenter within 2-3 degrees Fahrenheit of the target fermentation temperature.  Nevertheless, I'll be using a temperature monitor to take readings at two-minute increments from the fermenter's thermowell so that I can see how well the temperature control is working.

As I began adding the grain, it became obvious that 6.25 gallons was too much water for a grain bill this size.  The water level was about to fill the basket too full, so I extracted some of the water and unfortunately a small amount of grain, too.  This enabled me to keep the level below the holes in the side of the grain basket and below the overflow pipe.  I then adjusted the valve on the back of The Grainfather to flow approximately as much wort on top of the grain bed as was draining through it.  I ran the mash for over 90 minutes to ensure complete conversion.

The Grainfather was set to raise the kettle temperature to 170F for 10 minutes before I lifted out the grain basket and began sparging the grain.

Pre-boil volume was 6.5 gallons and pre-boil gravity was X Brix on my refractometer.

During the sparge, I set The Grainfather's kettle temperature to 180F to get it closer to boil temperature.   When the sparge completed, I set it to full boil.

60 minutes total boil time, with the following schedule:
The wort was then passed through The Grainfather's counter flow wort chiller and into the sanitized SS Brewing Technologies Brewmaster Bucket fermenter.

The wort entered the fermenter at approximately 68F.  Yield was just above 5.5 gallons and the starting gravity came out at 21 Brix on the refractometer.

I inserted my sanitized oxygen stone and inserted it into the fermenter.  The wort received 120 seconds of pure oxygen.

A packet of Abbaye yeast was pitched directly into the wort.  The fermenter was sealed and an airlock attached.  A fermentation wrap was placed around the fermenter and attached to my temperature controller.

The temperature controller was set daily for the first seven days, as noted below:

The recipe called for a final gravity of 1.013 to be achieved.

April 17:  Today I took a hydrometer reading of the beer.  It registered 1.009, which means that it attenuated past the recipe's estimated 1.013 or 1.012.  My refractomter registered 7 Brix from the same sample, or 1.0277 in standard gravity, which gives some idea of the inaccuracy of a refractometer when alcohol is present.  The sample had a nice slightly reddish brown color, very cloudy (probably since yeast is still largely in suspension), and a pleasantly fruity aroma.  The flavor was only very slightly sweet, but mostly dry with a balanced bitterness.  It wasn't hard to drink the sample, even flat and at 77F.

The chart below shows actual temperature in the fermenter throughout the one-week primary fermentation.  Maximum temperature was 73.1F, which occurred about two days after the yeast was pitched.  Ambient temperature where the fermenter was kept varied between 63F and 68F. 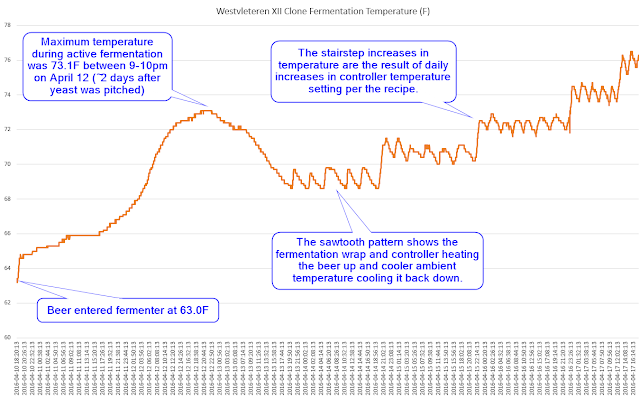 I transferred the beer to a secondary fermenter on April 17, placing it inside an insulated bag with two frozen one-gallon jugs of water.  The intention here was to meet the recipe's requirement to crash the beer for 3-4 days at 55-60F from the basement's ambient temperature of 68F.

The recipe then calls for keeping the beer at 45F for 8 weeks, which would put this some time into late June.  I purchased a cooling jacket from Cool Zone, along with tubing and a pump.  This has allowed me to keep the beer at 45F consistently for weeks now.

Due to a family trip taken in mid-May, I had to cut the cold conditioning short by a couple of weeks.  I bottled the beer using Coopers carbonation drops and its existing yeast.

On June 4, I opened a bottle to see how it was doing at that point.  I have to say it was a bit underwhelming.  There was a hint of dark fruit, a noticeable hops bitterness but not an extreme one, and a relatively dry malt flavor.  It certainly didn't remind me of the descriptions I've read of the real Westvleteren XII beer.  On the other hand, the recipe called for a YEAR of conditioning in the bottle.

I would have believed that a year of conditioning wouldn't change this beer that much.  However, I did brew a Northern Brewer Westvleteren XII clone kit a few months ago.  That kit produced a beer which, when fresh, tasted more or less exactly like this recipe.  I ended up drinking a lot of it as soon as it reached the three-month mark Northern Brewer's recipe recommended, because I wanted to free up the bottles to fill them with something else.

I opened one of those older bottles this past week and was surprised to find that it really had changed quite a bit.  The malt flavors began to be a bit more complex and sweet, the hops bitterness had mellowed a little, and the dark fruit flavors seemed to have been punched up somewhat.

I'm planning to box up the remaining bottles and stick them away in my cellar to sit for a year.  I'll be back to update the notes some time in April 2017.