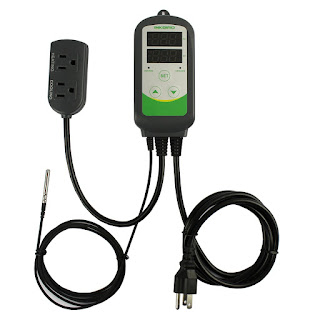 Like most home brewers, I've been gradually learning more and improving my skills over time.  One of the areas I've been trying to improve is temperature control during fermentation and bottle conditioning.

I'd ordered an expensive controller online which looked like the ultimate gadget.  I found that its temperature probe was many degrees off and that it couldn't be calibrated to read accurately.  I abandoned that model.

Then I found an inexpensive one on eBay.  That arrived from China.  Its temperature unit was Celsius, which required conversion to Fahrenheit when I used it.  That one seemed to be pretty accurate but wasn't so well-made.  I used it for a while until I saw this InkBird unit on sale.

The InkBird ITC-308 has been a joy to use.  It's met several of my criteria for a fermentation temperature controller:


For its relatively low price (around $39), I've been able to keep my fermentation temperatures in the range I wanted them to be.

I combined this unit with a 40-watt Fermentation heater to provide heating.  The low basement temperature combined with the conductivity of the stainless fermenter itself has (so far) provided all the cooling I've needed.  I know this because I used a temperature monitor to track its function over a three week period and it kept temperatures right where I wanted them, in a narrow range between 68F and 70F.