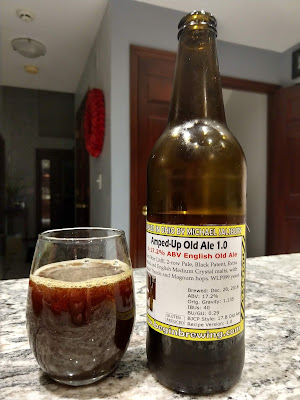 Having seen the success of my high-gravity ale experiment, I decided to take the process to another level. This time around, the goal is to produce a relatively authentic British Old Ale in terms of its grist, but dial the alcohol content up considerably. The goal here is a 16% ABV and retention of the basic flavors of an Old Ale.

According to BeerSmith, the beer should have the following qualities:

I'm well aware that an ABV over 9% puts this beer way outside the upper end of the Old Ale qualities in the BJCP criteria. My goal wasn't to produce a beer for competition but to try to produce a very high gravity version of an Old Ale for personal enjoyment and learning.

The Brewie+ was configured to provide 1.9 gallons of water for mashing and 1.9 for sparging. Half the malt extract was dissolved in the mash water, and half in the sparge water while the water heated. The treacle was also dissolved into the mash water for simplicity's sake. From there, the mash schedule was:
The boil would begin immediately following the sparge.

A 60-minute boil was scheduled, as described below:
After the boil, the Brewie was instructed to chill the wort to 68F before pumping it into the fermenter.

Based on my past experience with the 20% experimental beer, I planned to follow a similar schedule with this beer. That means holding the beer at 65F until it's finished or seems to be stalled, then increasing to 69F until it finishes out.

12/28/2018: I decided to raise a nice starter of WLP099 before pitching into the beer. After brewing, it registered 1.135 SG (exactly on target) but the volume came in a bit below the intended 2.5 gallons. Since the gravity target was hit, I decided not to dilute the beer but to leave it as-is for fermentation. Although the yeast starter (begun around the same time as the beer) already shows activity, I'm not willing to pitch it into the wort yet. I'll do that in the morning when the wort has cooled down from its current 73F to something in the yeast's 65-69F range.

12/29/2018 11am: Added half the yeast slurry from the starter into the beer. I was in a bit of a hurry at the time and did not let the yeast settle out.  This was a mistake, as it dropped the gravity from 1.136 down to 1.113. That will knock the ABV down to perhaps 12.9%. I'll probably make that up with some honey when the gravity has dropped far enough.

12/30/2018: Added some yeast nutrient and glucoamylase to the beer to help encourage the yeast to finish out the beer. For a while, and as I've seen in other big beers, gravity showed a big increase on the Tilt Hydrometer for a while, then started to drop back down. For a time, it went from 1.095 up to 1.109 and began going back down. It's currently reading 1.100.

(Between 12/30/2018 and 1/3/2019 I added a quarter teaspoon of yeast nutrient and some glucoamylase enzyme to keep fermentation going, also periodically rocking or swirling the fermenter to keep the yeast in suspension and active.)

1/3/2019: The gravity has since dropped to 1.039 SG (around 65% attenuated from the original 1.113 SG). I added enough honey to raise the gravity back up to 1.061 SG, adding approximately 22 SG points' worth (about 1.3 pounds). This makes the original gravity "effectively" 1.135 SG (my intended original gravity) for the purpose of calculating ABV after fermentation. In addition to the honey, I also added 30 seconds of pure oxygen and some yeast nutrient, stirring the wort hard to mix in the new sugar. The temperature has been increased to 67F to help encourage the yeast to finish up. There was a nice thick krausen on the wort when I sealed the fermenter back up, so I'm hopeful it will finish up fine. If it hits the estimated 1.018 SG final gravity, I'll have the 16% ABV beer I was aiming for.

1/5/2019: Gravity is now showing as 1.046 SG. I've added yeast nutrient and some glucoamylase enzyme, then swirled the fermenter to rouse the yeast. The blow-off tube is still "burping" regularly so the yeast are still happy and healthy. ABV now calculates as 13.94%. I raised the temp up to 68F to help keep the yeast going.

1/6/2019: Gravity has dropped to 1.043 SG today. That's 66% attenuation and 14.51% ABV. The temperature is holding at 68F. I learned with my previous high gravity batch that adding a second yeast strain late in fermentation helped the beer finish fermenting. Today I rehydrated some Montrachet wine yeast, added yeast nutrient to that, and added it to the fermenter.

1/8/2019: Gravity has dropped to 1.036 SG today. That's 71% attenuation and 15.36% ABV. I added some yeast nutrient dissolved in a tiny amount of distilled water and swirled the fermenter to keep the yeast suspended in the beer until (hopefully) the final gravity of 1.018 SG is reached.

1/12/2019: Gravity is now 1.026 SG, which is 16.74% ABV and 80% attenuation. According to White Labs, WLP099 can attenuate 80-100%, so the yeast is likely to start slowing down soon. Attenuation isn't available for the Montrachet yeast, so it's hard to know how it might affect attenuation. I do have some concern that Montrachet is known to produce a lot of sulfur (something I didn't know when I pitched it). Hopefully this will dissipate and not end up in the bottle.

1/17/2019: The gravity was down to 1.023 SG (17.15% ABV). I swirled the beer around this morning to help keep the yeast in suspension. The blow-off container had begun to grow mold, so I emptied that and replaced it with a clean container.

1/26/2019:  The beer was transferred into a sanitized 2.5 gallon corny keg and pressurized to 15 psi. The keg was moved and rolled around until the bubbling sounds stopped. It's now in the mini-fridge where the temperature should reach approximately 36F and the pressure was reduced to 10 psi. This should get me a carbonation level around 2.3 to 2.5 volumes of CO2 in about a week. At that point I'll see about bottling it for long-term storage. A sample of the beer from the last part of it in the fermenter after the transfer to the keg had an aroma that reminded me of Acai juice, which also seemed to come through in the flavor, along with the dark malt and treacle. It had a nice complexity to it, and I'm looking forward to seeing what it's like carbonated (and with 6-12 months of aging).

2/2/2019: The beer spent a week absorbing CO2 in the keg. Today, I attached a tap to the keg and dispensed a sample of the beer. It had a nice low-to-medium level of carbonation. I then used a growler filler to transfer the now-carbonated brew into 23 twelve-ounce bottles and 1 16-ounce bottle. Each bottle was immediately capped as it was filled to help preserve the carbonation. I plan to allow these to age for several months before serving.

2/3/2019: I poured a bottle tonight to take the picture at the top of this post. The aroma is fruity and boozy, with a wine-like note to it - most likely from the White Labs WLP099 yeast (which White Labs says will generate a vinous note above 16% ABV). The flavor is malty, reminiscent of a white wine, with a balancing amount of hops bitterness. The finish mixes malt, treacle, and wine in a way that resembles a mixed drink to me.  The carbonation isn't as obvious or good as it seemed before I bottled it, so I'm wondering if I should have used a second CO2 cartridge on it... something to consider for next time I brew one of these bigger beers.