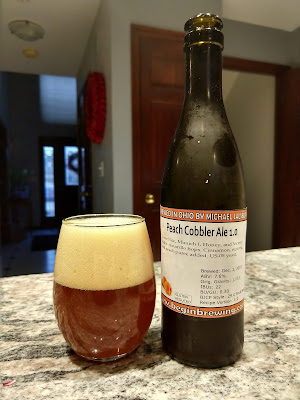 Earlier this year, my wife and I tasted a Peach Cobbler Ale brewed by one of the Ohio breweries (I cannot recall which one, which is just as well). It was a nice enough beer, but for my taste it was a little dry and thin. The peach flavor took a back seat to malt and hops, making it seem more like a Pale Ale with peach notes than a Peach Cobbler. Still, it inspired me to think about how I might brew my own version of the beer.

For my version, I wanted a sweeter, more full-bodied base, reminiscent of a nice slab of baked peach cobbler. That means a higher mash temperature.

I also want the crackery/biscuity notes of the malt to come through, to help the drinker imagine tasting a bit of crust. I'll use Victory Malt to try to achieve that. Some Honey Malt should help drive home the sweet cobbler illusion as well.

Cinnamon and Nutmeg will be used as well, as these are common spice additions to a peach cobbler.

Last bit not least is the choice of hops. When added late in the boil, Amarillo is said to impart citrus and peach type notes. I'm hoping those flavors will complement the peach puree used, and employing a single late-boil addition means no harsh bitterness and maximum flavor contribution, again helping to further the cobbler/dessert illusion.

To ensure a nice peach flavor, I'll ferment the beer with a very generous dose of peach puree. If I don't get enough peach flavor from that, I may supplement with natural peach flavoring to punch it up.

I'll use a clean-fermenting yeast with this, fermented low to keep it from generating any aromas or flavors that compete with the rest of the beer. US-05 is said by some brewers to be fairly clean, and in cases where it isn't, it tends to impart peach or apricot notes. If that happens, it will be good for this beer (where it might be undesirable in other).

I'm expecting the beer to have the following characteristics:
Mash schedule:

Boil Schedule:
Fermentation Schedule:
Once fermentation is finished, the beer will be treated with gelatin and cold-crashed for 3-7 days until bright and clear. Then I'll bottle it with 4 carbonation drops (medium carbonation) until it's ready to serve.
Post-Brew Notes and Observations

12/2/2018: The mash process went smoothly. Using the Brewie+, it was easy to do something I've not done before, which is to check the mash pH. It tended to hover between 4.9 and 5.2 during the mash, when checked periodically with an electronic meter. A gravity check during the mash, before the sparge, registered 1.060. After the sparge and pre-boil, it read 1.063 SG. This beats BeerSmith's estimate of 1.055 SG.

12/9/2018: Gravity is holding at 1.021. A sample of the beer from the fermenter revealed a restrained but clear peach note, a hint of cinnamon and nutmeg, and a touch of biscuity/crusty flavor. I'm hopeful that when it is bottled it will still deliver these flavors.

12/14/2018: Gravity has held at 1.018 SG long enough now that it's time to bottle. I bottled the beer today using four small carbonation tablets per bottle (medium carbonation). One ounce of Brewer's Friend peach flavoring was added at bottling. A sample of the leftover beer after bottling revealed a very nice peach cobbler flavor.

12/31/2018: The beer spent a while in a 76F hot box and did get carbonated, but seems in the process to have lost much of the peach cobbler flavor. There's a hint of peach left, and the barest hint of spice, but overall it's somewhat bland. I'm hoping it will improve some with age.

05/12/2019:  It turns out that the bottling wand used to fill the bottles with this beer was infected by an unknown strain of bacteria. The entire batch had to be dumped. Every bottle gushed its contents out after opening.  Worse, the affected wand was the one I used most often, so most of the batches I've brewed in the past year were infected at bottling and have had to be trashed.