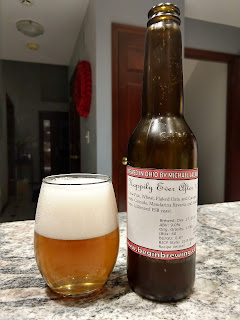 My step-son and his fiancee love big, citrusy IPAs. They would like me to brew one that could be given away as a favor to guests at the wedding. Not being a fan of IPAs in general, I don't have a recipe ready. Even if I did, I'd want to put a twist on it so that it's unique to them.

Reviewing the information I could find on NEIPAs, I learned the following:
My plan is to mix barley, wheat, and oat malts to get a nice body in the finished beer. They've asked me for a citrusy IPA, so I'm going to use a blend of Amarillo, Mandarina Bavaria, and Cascade (which all have citrus flavors in them) late in the boil. Although there's not really a whirlpool stage in the Brewie's process, I'm planning to drop the hop cages into the kettle during chilling to simulate that effect. I'll use an English Ale strain for the esters.

BeerSmith reports that the beer should have the following characteristics:
This all fits within the NEIPA style.

The mash schedule will be:

Periodically during the mash, I would move the bag around a bit and poke it gently with a plastic grain scoop to help ensure the mash water was flowing through and around it. I hoped this might help with starch conversion.

Mixing the typical whirlpool hopping style of a NEIPA with the way automated brewing systems work, we end up with hopping during the last 5-10 minutes of the boil. My plan will also be to remove the hop cages from their slots and drop them into the beer during the chill process to add more flavor and aromatics. That means our schedule will be:
The Brewie+ will chill the wort down to 65F in preparation for fermentation.

The plan is to keep this toward the lower end of the yeast's optimum temperature range (65-72F) to minimize the production of esters. Lallemand ESB yeast is a medium attenuation strain with low flocculation, which should make it a good fit for the style.

When the gravity is down into the 1.028 to 1.020 range, I'll add dry hops (one ounce of each of the hops used in brewing) to add aroma. When the final gravity is reached, I'll bottle with 1 large carbonation drop (medium carbonation) per bottle and hold it at ambient basement temps until carbonation completes.

12/27/2018: I began the brew day by re-calibrating the Brewie+ weight sensors to ensure that it loads the correct amount of water into the mash and sparge processes. This took longer than I remembered, but it's recommended to do this occasionally. I think I've made four batches in it since the original calibration, so it seemed like a good time to re-calibrate.

This recipe uses a bit more hops than I think are recommended for the Brewie+, but since I plan to drop them into the wort after boiling to simulate whirlpool hopping, I'm hoping that will be OK.  I'll plan to be with the machine at the end of the boil to be sure.

10pm: The beer came out high on gravity and low on volume. I added steam-distilled water to it, which brought the volume up to 2.5 gallons and dropped the gravity to 1.069 SG, which is exactly where I wanted it to be. The temperature was 71F at that point, within the yeast's range of 65-72F. I sprinkled the dry yeast on top and sealed up the fermenter, without temperature control for now. With the basement in the 63F ambient range, the beer's temp should get quite a bit lower before the yeast kicks in. I'm hoping it can free-ferment, but we'll see.

The kettle had a nice grapefruit/citrus aroma during chilling. Unfortunately, this was a lot of hops for the Brewie+ to handle. There was quite a lot of hop residue in the bottom of the kettle at the end of the boil, enough that I actually scooped a lot out before running the cleaning cycle. I ran both a Sanitizing and a Full Clean cycle after this batch to do my best to get the Brewie clean for its next run.

12/30/2018: I added a packet of US-05 yeast to try to encourage the last few points of gravity to ferment away. Gravity is reading 1.027 SG. I also added a half-ounce of Amarillo and Mandarina Bavaria hops to dry-hop the brew.

1/6/2019: Gravity is reading 1.002 SG now, and has been holding at that figure for about two days. I've decided to go ahead and bottle it, as I doubt it can get much lower. I bottled it with 4 small carbonation tablets per bottle (medium carbonation) and placed it in a 69F "hot box".

1/12/2019: I opened a bottle of the beer tonight to check in on it. The beer seems to have carbonated nicely. The hope flavors seem a little less bright now, but present. A little diacetyl was detectable, but that should go away in a little while.

1/19/2019: I removed the beer from the "hot box" I'd been keeping it in so that I could raise the temperature for another beer that's in the box and hasn't carbonated. I've found in the past that beers seem to age faster when kept in a warm environment, and that would spell the death of an IPA or Pale Ale.